Dressing up and stepping out

After that first night as lovers Edward and Janet, fell deeply in love with each other, it was a passionate, hot and very intimate relationship. They had known each other for years and now, they weren’t just best friends, and they were soul mates. It was like they wanted to catch up with the time they had wasted before, and now they just couldn’t take their hands off each other.

They spent most of their free time together, lying in bed, watching movies and making love. The sexual chemistry between them was amazing; they tried a lot of different things and fantasies. It had been 3 weeks since the night they realised they wanted to be together, and they hadn’t told their friends, they didn’t have time for anyone else. So when their good friend Alex, invited them to a costume party at his house, they felt it was the perfect opportunity to let their friends know about their happiness. They both RSVP’d to the invitation as ‘Attending as a couple’. 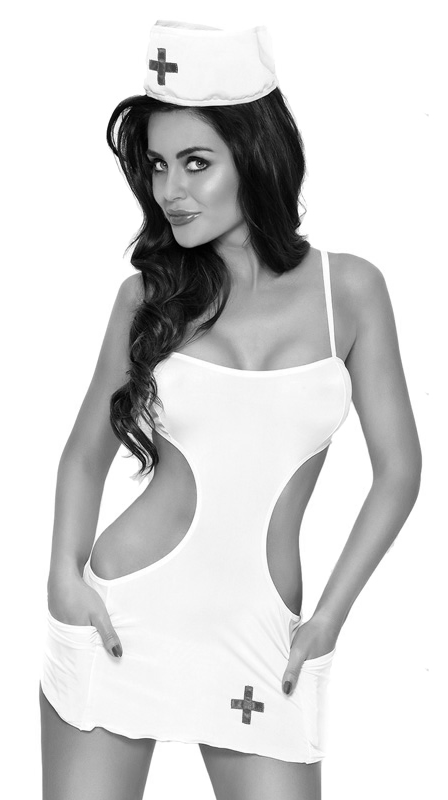 “…for the party, she chose a sexy nurse dress…” Click the image to see more

This new passionate relationship had awakened a sexual side in Janet she didn’t know she had, she felt more confident and loved her body more than ever. Edward made her feel the most sexy and beautiful woman in the world, and she wanted to look this way. So for the party, she chose a sexy nurse dress. It was very revealing; short, with cuts on the sides of her waist, open back and a nice cleavage, she combined it with some sexy white stockings and a nice white hat with a red cross on it. Edward dressed himself as a fireman and looked incredibly attractive.

When he picked Janet up, he couldn’t believe how sexy and hot she looked, she was gorgeous and this super sexy costume made her look just like someone taken out of a movie. As soon as she jumped into the car, he let her know how attractive she looked by kissing her deeply, biting her lips and stroking her hair. She looked at him directly to his eyes, and told him he looked very handsome and she couldn’t wait to be alone with him.

On the way to the party the talked about how their friends would take the news of them being together and how surprised they will be. They talked about how crazy it was that in less than a month their relationship had grown so much. They finally arrived to the house, but before leaving the car, they kissed each other passionately, he touched her all over the tiny dress and she felt his groin hard for her. So she went down on him, taking his hard dick out of the costume and started licking it and sucking, while he caressed her hair and told her how beautiful she was. He finally came in her mouth as he told her he loved her.

They got themselves back in order, and went to the party holding hands happily. When their friends saw them arriving together, were surprised but very pleased. They all thought they looked great together and they should have been together sooner. Janet and Edward, had a great time talking with their friends, drinking and dancing seductively. Every dance drove both of them crazy; feeling each others body so near, and not being able to do everything they wanted.

Finally the party ended and they headed to Edwardâ’s place, since it was closer. During the ride, they didn’t talk much, they were both thinking and fantasising about the night that was coming ahead. As soon as they closed the door, Edward grabbed her by the waist, pulled her close to him and kissed her. Then, he turned her around, pushing her against the door, lifted her dress a little bit, a bent on his knees to eat her out. He was pleased to see that she was already wet; he loved her flavour, the way her juices tasted. Janet had her first orgasm as Edward licked her clitoris.

Then, he stood up and without wasting any more time unzipped his costume, moved her sexy thong to a side and penetrated her deeply. He kept fucking her hard, for a while, playing with her breasts and kissing the back of her neck, after a while she reached her second orgasm, but felt more turned on than ever. They went to the sofa, where she placed herself kneeling, making her short sexy dress reveal her beautiful ass. Edward spanked her playfully a couple of times, and after kissing her pussy one more time, he penetrated her. But this time Janet started moving and having control, she moved her hips making his dick go in and out of her with a soft but deep rhythm that drove him crazy, and made him cum inside her with a big explosion of pleasure.

They both laid exhausted on the sofa, talking about how great it had been, and how fun it would be for them to include costumes into their role plays in bed.

← The first rush of love The gift is in the giving →